Dubai: Center of the Sex Trade 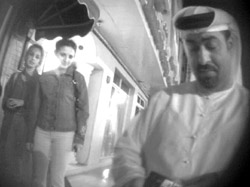 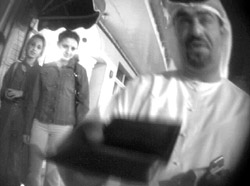 The man in national dress pictured here works for the Criminal Investigation Department of the United Arab Emirates (UAE). On February 3, 2005, under his supervision, pimps of various nationalities were selling women right in front of the Inter City hotel in Dubai. Among the women were underage girls, including Armenians. (See also: Desert Nights).

The Police Department and the Migration Service are involved in the sex trade in Dubai. This is a hugely profitable business for the country. Indeed, it is the presence of these women that attracts so many businessmen from around the world, and Arab sheikhs and their sons, to Dubai. Policemen supervise the business in order to avoid troublesome situations, so as not to damage the country's prestige. The outside world shuts its eyes to hundreds of outrageous facts. The US State Department's 2006 Trafficking in Persons Report lists the United Arab Emirates and Armenia side-by-side. It may seem surprising to see a country where one can freely buy women in the streets listed on the same tier as Armenia, but the United States doesn't want to apply sanctions to the UAE, its partner.

A source in the Dubai Police Department told us that following the publication of the Trafficking in Persons Report, the police carried out a number of round-ups in various hotels, nightclubs, and discothèques, including the notorious Cyclone nightclub. Some 4,000 women who had violated UAE visa regulations were arrested. About 80 percent were from Russia and other former Soviet republics, including Armenia.

Hetq Online has reported extensively on one of the sex trade networks in the UAE, publishing photographs of various people engaged in the business as well. (The Armenian network in the Dubai sex trade, Dubai is Hell on Earth), The only reaction from the UAE government was to ban the Hetq Online Website in the country (Hetq.am Banned in the Emirates). The international organization Reporters Without Borders appealed in vain to the UAE government to lift the more than yearlong ban. (Reporters Without Borders calls for end to blocking of news website).

The fight against human trafficking is perfunctory

The following story demonstrates how thoroughly the UAE Police and Migration Service are interlinked with the sex trade. It is also graphic evidence of just how perfunctory the activity of various international organizations fighting against trafficking is. These organizations have become bureaucratic structures concerned only with getting grants, and organizing conferences, seminars and round-tables. One classic example was a discussion organized recently in Yerevan, at which representative of the Ministry of Foreign Affairs regaled those present with stories of the Ministry's hard work in the campaign against trafficking in persons. The real story is very different.

Mike Trinidad is from Singapore and went to Dubai on a business trip. In e-mails to Hetq, he wrote: “Until recently I was unaware Dubai had such a bad name in this type of industry. 8 weeks ago on a previous trip through Dubai I met a lady called Lidia at the York International Hotel. I could see even at the beginning she was in some type of mental anguish. I made a point of looking for her again 2 weeks ago to find out what the full story was. She had been sent here for another job from Moldova then when arriving in Dubai her passport was taken from her and she was told she is now a prostitute. During her nearly 2 months here she had been paid nothing, they said they had extended her visa but had not.” 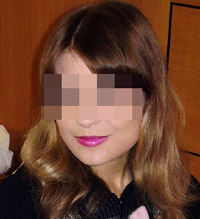 Troubled by her painful situation Mike suggested that Lidia escape and turn herself into the police. 24-year-old Lidia agreed . “She came to me with only the clothes on her back and I took her to see an Officer Khalid in the anti-human trafficking department at CID headquarters. Mr Khalid appeared sincerely concerned and said nothing to worry about and that on Saturday the 3rd he would get her passport back,” Mike continued.

On the morning of June 3 rd , Lidia received a phone call and was told that a girl would bring her passport to a restaurant near the hotel. Mike suspected that it might be a trap, but Lidia insisted that it couldn't be. And Mike had to accompany Lidia. “ The girl known to Lidia called again saying she was running late and to confirm Lidia was there. Shortly thereafter two men entered the restaurant and said they were taking the girl, I naturally told them rather impolitely 'no'! After some time which included threatening Lidia they identified themselves as police officers. I called Officer Khalid and told him of the situation and he told me not to let Lidia go with them. After another period of time of threats and intimidation a uniformed officer arrived. I again called Officer Khalid who spoke with the uniformed officer. At the completion of this call Officer Khalid said he knows these officers, everything will be OK, he would see her at 1pm and she would be out at 3pm. So at this point Lidia was taken by uniformed and non-uniformed UAE police,” his e-mail read. 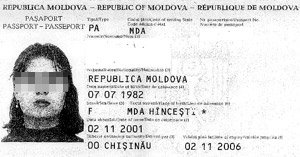 At 3 p.m., Mike began calling and leaving messages for Khalid, but in vain. “At 8am Sunday morning I was messaged by Officer Khalid for some information at which point I wanted to know what was going on at which point I was told everything is ok and she is fine and that I would see her that day. I sent the required information which was telephone numbers etc from Lidia's phone then again another day goes by with no further information and no chance to see her. Today is Monday and repeated calls and messages have gone unanswered. We were told by Officer Khalid there would be no time spent in prison, she would get her passport and be allowed to leave as she is the victim,” Mike wrote.

“Normally prisoners are allowed a phone call or visitations, or is the UAE different? At this point it appears a victim cannot go to the UAE police for assistance?” Mike said. On June 6 th he went to the jail to visit Lidia.

“I go back today at 9:30am and they ask me what I want. I tell them I was told to come back today to visit Lidia. After some time they bring Lidia to the door, she is not allowed to speak and they say is this she to which I reply yes. Then they close the door and say I cannot visit her because today is for female visitors only! Then I am taken to see the captain and he then tells me she will be allowed no visitors as she is a prostitute and the investigation is ongoing! When asked when she will be deported I got no answer,” - Mike wrote us on Monday – “At this point Lidia does not know what is going on and her parents have been told nothing by the UAE authorities. So bottom line if a trafficked woman goes to even the UAE police anti trafficking unit she will be the criminal and she will receive no compassion or assistance at all. To add insult to this her boss or handler is still free to roam the city.”

Meanwhile, Mike sent letters to various organizations and embassies, including the local UN office. None of them replied. “The Anti Human Trafficking Department inside the UAE police is either a farce or powerless. As you can see from the story we went there for help and were offered assurances. This is especially the case with countries that have no consular support in Dubai. At this point the Anti Human Trafficking Department still offered assurances but did nothing. There must be 100's of other trafficked people here I have seen with my own eyes alone who most likely want to go home,” Mike wrote.

Lidia's parents were unable to help their daughter from Moldova. They tried to find the woman who took their daughter to Dubai, and appealed to the law enforcement agencies to put a stop to the woman's activity.

The names and telephone numbers of Lidia's bosses are known. Mike informed police about them. But nothing has happened to them. They continue to live in Dubai and exploit hundreds girls like Lidia. The name and the telephone number of the person in Moldova who keeps Lidia's passport are also known. Our appeals to law enforcement agencies in Moldova have thus far gone unanswered. Mike has Lidia's cell phone and he keeps getting threatening phone calls from Moldova.

Fortunately, this story has a happy ending. Thanks to Mike's efforts, Lidia was saved. He bought her a ticket and she went back to Moldova. But there are thousands of stories like this in the United Arab Emirates, and not many of them have such a happy ending.

“I think this will be a subject I will be involved with for many years. We have isolated incidents in Australia with human trafficking and they are severely punished, just this week a Chinese woman got ten years jail, but it is rare. I had heard of the former soviet union trafficking and organized crimes,” Mike wrote, wondering at the fact that he received only a handful of responses to all his letters to different organizations and individuals seeking help for Lidia. “It's most surprisingly, that the Australian government made no comment at all and every UN person I contacted didn't want nothing to do with it. The UN has a site dedicated to this but isn't interested and when I went to the UN office in Bahrain they didn't even know they had a mandate on human trafficking,” Mike concluded.