Today was big demonstration of the opposition to the constitutional amendments, where they should have marched onto the presidential palace since the government didn’t fulfill the demands of the people and deem the election null and void. 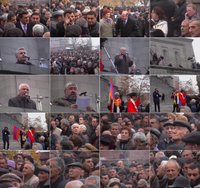 When I came down Baghramian Street and passed the Presidential Palace and Parliament, I didn’t see any water canons, barbed wire or riot police standing by. I knew from that, there would be no march today.

The demonstration was well attended and this time I saw quite a few young people, which in the past I didn’t notice.

It seems that my prediction of things fizzling out and people loosing interest didn’t materialize and since this time there is an unquestionable smoking gun to prove without too much doubt that a major act of deception has taken place, thus with the good turnout today, we just may see some results and some form of justice could materialize. 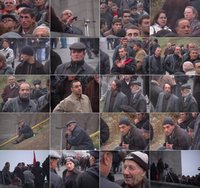 The usual speakers got up and spoke, but this time much of what they were saying was starting to make sense. All I know is that if things continue as they have been, those that are responsible for fixing the election have something to worry about.

According to one of the speakers, 160,000 people who have the old red Soviet passports and expected to vote no to the constitutional amendments, were denied the right to vote. 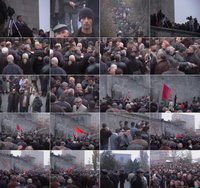 It was reported that there were 16,000 people who were involved in collecting names of people for the election registers who are not present, who will not vote and in some cases, who are dead. Those are 1 million of the votes that are said to have been falsified.

They said that we will not have any problem to come up with those peoples names and those names should be made public. At one point, it sounded like this guy was calling for a witch hunt.

The next meeting will be next Friday (the 9th), at which time if the government does not comply with the demands of the people and set things straight, then maybe the people will finally take to the streets and storm the Presidential Palace or Parliament.
Posted by Ara at 12/02/2005 11:11:00 PM