Passing On The Torch

It seems that the old boys are just passing the torch to their sons to carry on their work. In Azerbaijan it's the Aliev's and in NKR it seems to be include the Yesayan's.

I know Karen Yesayan and also his father Oleg, who if you ask me are both quite corrupt. Karen's uncle Seroshik is a history teacher and one of the nicest most humble people I know in Martuni.

I would say it is safe to say that with Karen as the Minister of Economic Development, we will probably not see much develop in NKR during his time occupying this very important post.

The only positive thing I would hope will come from his appointment is that he finally opens up the only hotel in Martuni which he privatized and closed for remodeling almost 10 years ago, leaving Martuni without a place for visitors to stay at when visiting Martuni. I'm not even sure why he would have privatized the hotel when he did, as I and another Diaspora Armenian were in the processing of doing the same and we were ready to invest a large sum of money to modernize it.

Anyway, I really hope that the President made the right choice with this appointment, though like I said, this looks to be more like the torch being passed on to another member of the establishment. 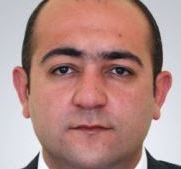 On June 2, President of the Nagorno Karabakh Republic Bako Sahakyan signed a decree on releasing Benik Babayan from the post of Minister of Economic Development upon his own request.

By another presidential decree, Karen Yesayan was appointed Minister of Economic Development.