International Pop Star In The Making

For those of you who have been following MOB since 2005, you may remember a young and very talented musician I discovered studying at the Gomidas Music Conservatory.

As we followed Nick’s rise to stardom over the years here, here, here and here, the latest installment is in the form of a concert he will be performing at in London on October 1, 2009.

The concert which is sponsored by the Armenian Youth Forum UK will feature the biggest names in Armenian Pop, including Hayk Kasparov, Der Hova, Hasmik Karabedyan, Andre and our very own Nick!

For those of you in the UK, here is your chance to see perform live. 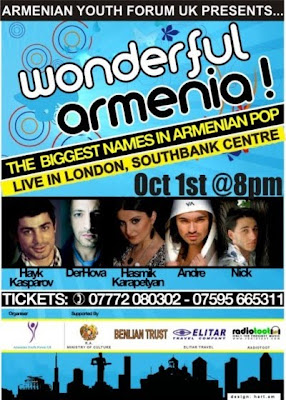 Proposed Armenia/Turkey agreement must not be signed by ROA leadership

Through the news media, you have already been informed about the joint announcement made by the foreign ministers of Armenia, Turkey and Switzerland, along with the “Protocol on the establishment of diplomatic relations” and the “Protocol on the development of bilateral relations, made public by the Ministry of Foreign Affairs of the Republic of Armenia. According to the framework of the roadmap, the “internal political consultations” on the two protocols will be completed within the next six weeks, after which “the two Protocols will be signed and submitted to the respective Parliaments for ratification by both sides”.

We are opposed to Armenia’s concurrence to these Protocols without any changes. The Protocols include two out of three preconditions Turkey imposes on Armenia since the first day of Armenia’s independence, as sine qua non for any protocol establishing diplomatic ties. The two preconditions are as follows: a) Giving up any territorial irredentism, and b) suspending the international recognition of the Armenian Genocide. Turkey keeps presenting through the media its third precondition of resolving the issue of Nagorno-Karabakh based on Azerbaijan’s terms, even after the release of the Protocols, announcing that it will not sign an agreement establishing diplomatic ties and opening the frontiers unless the Nagorno Karabagh issue is resolved. By completing these preconditions, the leadership of the Republic of Armenia is acting against set political strategies for Armenia’s national security. According to that strategy, Armenia should not develop ties with Turkey based on Turkish preconditions.

We have entered an era, as a nation, where the leadership of Armenia is endangering national and state interests due to a misguided policy. It is vital to consider this moment’s gravity and pool our efforts to confront this threat. At this moment, our goal is to change the declared Protocols and -- in a worst case scenario -- stop the leadership of Armenia from signing them.

Until ARF Bureau’s further actions, it is necessary to focus our propaganda on the following points:

a) The Armenian Revolutionary Federation is convinced, that Armenia and Turkey can establish good diplomatic relations only with the recognition of the Armenian Genocide by Turkey and by the restoration of the rights of the Armenian nation. The establishment of diplomatic ties and the opening of the frontiers without any preconditions can be a starting point towards constructive neighborly relations.

b) Thus far, there has not been any positive overture by Turkey since the summer of 2008, when a diplomatic dialogue started with the initiative of the President of the Republic of Armenia. On the contrary, the leadership of Armenia has compromised by allowing Turkey not to abide by previous agreements, while keeping the stance of honest negotiator.

c) The ARF finds the normalization of Armenian-Turkish relations absolutely unacceptable if it is going to work against our country’s welfare and the national rights of future generations.

d) The “Protocol on the establishment of diplomatic relations” satisfies two of Turkey’s three preconditions. First, the paragraph on “Confirming the mutual recognition of the existing border between the two countries, as defined by relevant treaties of international law” shows that the Republic of Armenia is giving up its right to restore its territorial integrity, which is unacceptable to us, and therefore vehemently rejected. In the same Protocol, the paragraph stating “Reconfirming their commitment, in their bilateral and international relations, to respect and ensure respect for the principles equality, sovereignty, non intervention in internal affairs of other states, territorial integrity and inviolability of frontiers.”

e) This sentence must be corrected by omitting the first two words “bilateral and”, leaving just the word “international”. Armenia and Turkey have not signed a bilateral protocol, therefore they have no bilateral obligations as the protocol suggests. Armenia and Turkey have assumed the obligation of respecting the principles mentioned in the sentence by their participation in international structures, therefore, those obligations are international in nature. The injection of the word “bilateral” in this sentence is a veiled allusion to such treaties, as that of Alexandropole (1920) or that of Kars (1921).

f) The following sentence of the “Protocol on Development of Relations Between the Republic of Armenia and the Republic of Turkey”, which says,”“””Implement a dialogue on the historical dimension with the aim to restore mutual confidence between the two nations, including an impartial and scientific examination of the historical records and archives to define existing problems and formulate recommendations.””” -- with the pro forma participation of Armenian, Turkish, Swiss and international experts -- “””is equally “unacceptable

It is clear, that this sub-commission will be utilized by Turkey as a basic stumbling block in the efforts exerted for the recognition of the Genocide of the Armenians by the international community. If Turkey’s intention is really a scientific, impartial study, she must first create the required legislative, political and social conditions in the country, and implement that study through the participation of unbiased international experts. A dialogue leading to mutual trust between the Armenians and the Turks can be fruitful only when Tulkey accepts her own history. Otherwise, that ”“””dialogue”“”” reduced to the study of historical documents and archives, will give Turkey the opportunity – with the consent of Armenia -- to put the fact of the Genocide of the Armenians under a shadow of doubt, discrediting Armenia and the Armenian people and making them scuttle the issue of the recognition of the Genocide by their own hands.

There are disturbing points also in the August 31, 2009 press releases of the Department of the Swiss Federation, and the Foreign Ministries of Armenia and Turkey. It is stated there« that ”“””The internal political discussions will conclude withing six weeks, after which, the two Protocols will be signed and presented to the respective parliaments for ratification.”“”” Turkish law stipulates, that documents establishing diplomatic relations, or lifting of blockades must have the approval of parliament before becoming law. In the case of Armenia, National Assembly’s confirmation is not a requirement for the activation of diplomatic relations. In this case, the approval by the National Assembly of any protocol grants it the power of law, making things even more hazardous. Therefore, these protocols must not be introduced in the National Assembly for endorsement.

That same press release does not specify the time when the sides will endorse the Protocols after they apply their signatures. There is a good possibility, that Turkey may postpone the ratification process in parliament and actually stop the process again in its tracks, to suit the conduct of her policies. Likewise, one cannot rule out the possibility« that the Turkish Parliament, after a while, may refuse to endorse the Protocols reducing the entire time and effort of the process to naught.

The Armenian Revolutionary Federation calls upon all Armenians, the political circles of both the Homeland and the Diaspora, to assess correctly the process of the Armeno-Turkish relations and the obvious negative results, and in utmost unity, prevent the possibility of irretreavable losses.

All ungers, bodies and party media must follow must follow these political-promotional guidelines. At this moment, until further notice, while questioning President Serge Sarkisian’s authority to confront the entire nation with such unilateral concessions, we are demanding a reevaluation of this dangerous political course.

Once more, we affirm the concluding thoughts of our Circular No. 34. To confront effectively this and all following challenges, it is imperative to renew our resolve, to maximize our potential, to be better organized and disciplines as we tackle the tasks ahead. Our bodies and ungers must be vigilant not to allow our struggle against the erroneous policies of the Armenian Government to lead to a weakening of the psychological and ideological ties between the Homeland and the Diaspora, or our criticism against them, particularly in the Diaspora, must not be made in a manner that may diminish the concept and love of Fatherland. Our country and our national interests are above all other stances.

We wish you success in your endeavors.