Officer to be strictly punished for harassment against soldier, Armenian Minster 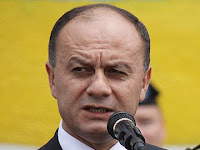 An officer who humiliated a soldier in a scandalous video on YouTube will be punished very strictly, Armenian Defense Minister Seyran Ohanyan said.

A video in which young people in the uniform of the armed forces of Armenia are subjected to pressure, humiliation and abuse appeared on YouTube on September 11. The operative measures made it clear that mayor of N military unit being at a drunken state abused and mocked at two soldiers. Galstyan was arrested and he was charged over abuse of powers.

“The video posted on YouTube was released at the order of the Defense Minister with the efforts of the military police and commanders of this military unit. Then I said that those responsible will be arrested and held accountable and we saw that it happened”, Ohanyan said.

He called this case an unpleasant and a negative event for the Armenian armed forces, especially for officers.

The minister said that this is a very negative event for the officer “however, the command staff reported me that this officer is a war participant and he is quite responsible in fulfilling his duties when not drunken”.