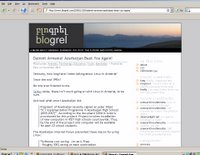 Blogrel Link Has Been Suspended Until Further Notice

For the last few weeks I’ve been quite disappointed in what has been posted on Blogrel and specifically the postings by Katy, the “solo-active contributor/monitor/editor.”

I’m not sure anymore what her intentions are, but since her trip to Baku and what I would call some possible inaccurate reporting, I’ve been reading what she writes with a bit of suspicion.

Though on the surface Katy is a nice person, what sticks in the back of my head are a couple of things about her that I have personally witnessed.

The first is the bold and as a matter of fact statements she made a few years back about how Artsakh (Nagorno-Karabagh) is a place where smuggling is going on. From what I remember she was talking about drugs for sure and maybe there was even mention of weapons.

When I confronted her about this, her “as a matter of fact” statements became speculation and she immediately stop spreading the roomers among people I know. Her statements fell in line with the Azeri propaganda at the time.

The second thing that sticks out about Katy and maybe is just a matter of circumstances was that when the scandal of the United States sponsored Project Harmony was being accused of corrupting our children with pornography in public schools that they were providing internet to, Katy was working for them.

When I later pushed the issue on my blog (which at the time was on Cilicia), Katy made it a point to distance herself from Project Harmony and make it clear that she no longer has anything to do with them (I’ll have to dig up the e-mails I have with her so I can be more accurate with my information).

One other project that if I recall Katy was working on or maybe it was Project Harmony after Katy left, was some project that got Azeri and Armenian students, along with American students to interact and talk about war, democracy and freedom (something like this) via the internet. I wrote about this also, which maybe Katy’s name came up in this as she commented.

Unfortunately, due the postings at Blogrel, which I don’t agree with, we at Martuni or Bust have decided that we can no longer recommend to our readers Blogrel and have remove our link to their site until these issue are addressed and resolved.

And just so you know that I’m not alone on this, the following is a comment from Paul, which was made on Cilicia.com’s Life in Armenia in regards to some other questionable logs by some guy named Nathen, who is working on some project called “Global Voices Online,” that is being sponsored by Harvard University’s Berkman Center and Reuters.

"I guess this is the best time to also question the views and material intent of Blogrel and Katy its current and solo-active contributor/monitor/editor. I've heard from Armenian-Diaporians directly that Blogrel’s Katy is a pleasant person in real-life, but an unyielding and sinister critic of both current day Armenia and the Armenian-Diaspora. Reading Bloggrel during her tenure has often left me somewhat disappointed and disenfranchised with the non-Armenian estimation. I now entirely avoid what "Katy at Blogrel" writes or posts about. In my opinion they are half-truths or straight-up lies. We as a collective Armenian online readership should avoid facilitating strategically ambiguous minded sources for misinterpreting our people’s spirit and entitlements. Armenia with all her challenges will be best resolved without the interference of such distortions or non-Armenian intervention. Thanks and Happy New Year.”