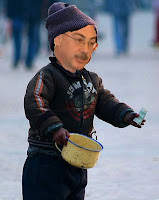 I trust Arkady Ghukasyan less than I trust a used car salesman. Read the story below to see how he is telling the Diaspora what he thinks they want to hear, yet a little too late so that actions can be taken to counter the damage already done by the Armenian government.

I encourage everyone to SEND A STRONG MESSAGE back to Ghukasyan and the President of the Board of Trustees of Armenia Fund, Serge Sargsyan (also the self-elected President of Armenia) BY NOT DONATING TO THE ARMENIA FUND. They are not interested in our opinion (as Serzh himself said "I did not go to the Diaspora to ask them their opinion, I went to tell them what I was going to do..."), so they don't deserve our donations, which in the past very little of it has gone to the projects they were intended for and instead ended up in their, the government workers who somehow turned multi-millionaire pockets.

Anyway, if you want to see what a two-faced kiss ass Ghukasyan is, read the story below.

He also Describes Armenia's Foreign Minister as Weak and Unprepared

The Noyan Tapan News Agency reported this week that Arkady Ghukasyan, the former President of Artsakh, currently Armenia's Ambassador-at-Large, and the Vice-President of the Board of Trustees of Armenia Fund has been visiting the United States and Canada to solicit donations ahead of the upcoming Thanksgiving Day Telethon on November 26.

Mr. Ghukasyan started his North American tour with an October 19 reception in North Jersey, New Jersey; continued with an October 24 reception in Montreal, Canada; and as of press time on November 3, he had been present in Los Angeles, in order to solicit donations for the Telethon.

According to several participants, Mr. Ghukasyan's stated purpose of his appearances was to discuss the upcoming Telethon, which will raise money for Shushi.

"However, the bulk of his comments pertained to the Protocols. Overall, his performance was reported to be fairly polished. He admitted various weaknesses and shortcomings in the Protocols throughout this process. At the same time, he defended the President's integrity and patriotism. In criticizing the Protocols, he did very little sugarcoating; in fact, he probably went beyond the call of duty. Overall, his comments left the audience slightly off-balance -- happy over criticisms that were quite strong at times, yet cynical as folks realized that his criticisms were mainly designed to placate us, not to change anything substantial," reported one participant.

Mr. Ghukasyan, who several months ago was appointed as Armenia's Ambassador-at-Large by Pres. Serge Sargsyan, said that he was aware of and understands the Diaspora's dissatisfaction with the Protocols. He further claimed that he shares those feelings, and sees them to be justified. He acknowledged that Armenia's Foreign Minister Edward Nalbandian is very weak and unprepared.

Mr. Ghukasyan stated that he "realizes that dialogue with the Diaspora occurred very late in this process, and that was a mistake also; that he could not understand how bright Diaspora Armenian minds weren't included in the process, as they can offer their know-how in dealing with such issues," especially when -- as Mr. Ghukasyan underlined -- "fighting against Turks on the battlefield is easier than dealing with them in a diplomatic war. For the latter, Armenia is in serious need of advisors," he reportedly said.

Mr. Ghukasyan claimed that he "has privately expressed his displeasure about the Protocols to the President, ten times more than Diaspora's complaints." At the same time, while the Protocols are sub par, they are not fatal and "we need to develop loopholes and adopt new laws to protect ourselves."

He even noted that "it's possible that Pres. Sargsyan made a mistake, but he is a sincere and patriotic person who has taken a heavy responsibility on his shoulders," appealing to everyone "to support the President, not to oppose him."

In a related note, Mr. Ghukasyan acknowledged that Armenia went into this "not fully appreciating the impact of the Protocols, and that it must work on that; and that "Genocide recognition is something that Armenia wants and it is not negotiable."

In an attempt to relieve Armenia's current leadership of comprehensive responsibility on core issues affecting all Armenians, Mr. Ghukasyan urged the Diaspora "to continue its fight for Genocide recognition, and that no one, not even Armenia, has the right to prevent it from doing so." A donor underlined that in saying this, he evaded the question of whether Armenia itself bears responsibility for pursuing this issue, until members of the audience stated that Armenia and Diaspora should be working together, to which he agreed and moved on.

As for Artsakh, he said no one is prepared to give up a single village from the liberated territories.

Regarding fund raising, he claimed that the Azeris are watching closely, reminding his audience that "If we don't raise enough funds for Shushi, the Azeris will immediately say that Shushi is not that important for Armenians." This rang hollow -- a shallow fund raising ploy.

He concluded by lavishly praising a number of well-known sponsors in the audience, again to prepare the ground for fund raising.

While several influential members of the Armenian-American community embraced Mr. Ghukasyan's message with apprehension, there is no doubt that Armenians worldwide should rally around Armenia-Artsakh and forge ahead with their economic and moral solidarity.
Posted by Ara at 11/15/2009 01:50:00 AM