AMBASSADOR RECALLED FOR ACKNOWLEDGING THE GENOCIDE 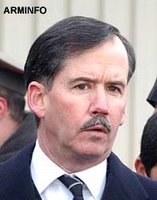 AMBASSADOR EVANS TO BE RECALLED FOR ACKNOWLEDGING THE GENOCIDE

Ever since last year, when John Evans, the U.S. Ambassador to Armenia, during a tour of the Armenian American community, broke rank with his superiors and publicly acknowledged the Armenian Genocide, there have been persistent stories circulating about his possible recall.

Last year, during a public gathering at the University of California at Berkeley, Amb. Evans courageously said: "I will today call it the Armenian Genocide…. I informed myself in depth about it. I think we, the US government, owe you, our fellow citizens, a more frank and honest way of discussing this problem. Today, as someone who has studied it … there’s no doubt in my mind [as to] what happened…. I think it is unbecoming of us, as Americans, to play word games here. I believe in calling things by their name." Referring to the Armenian Genocide as "the first genocide of the 20th century," he said: "I pledge to you, we are going to do a better job at addressing this issue." Amb. Evans also disclosed that he had consulted with a legal advisor at the State Department who had confirmed that the events of 1915 were "genocide by definition."

Within days of making these statements and after complaints from Turkish and Azeri officials to the State Department, Amb. Evans was ordered by his superiors to issue "a clarification" in which he said that "misunderstandings" might have arisen as a result of his earlier comments. He said that he had used the term "genocide" in his "personal capacity."

Several months later, under pressure from the State Department, the American Foreign Service Association took the very unusual step of rescinding a "Constructive Dissent" award that it had decided to grant Amb. Evans during a special ceremony that was to be held at the State Department on June 17, 2005. It is highly ironic that Amb. Evans was deprived of a "dissent" award for deviating from official U.S. policy! Around that time, he was abruptly summoned to Washington, D.C. by his superiors for consultations. 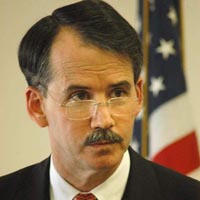 After months of uncertainty, it now appears that the rumors about his possible dismissal have finally become reality. The State Department recently finalized the decision to recall him. According to reliable Armenian governmental sources, Amb. Evans informed high-ranking Armenian officials last week about his departure in the coming months, pending the Senate approval of his likely successor, Richard E. Hoagland, who is currently the U.S. Ambassador to Tajikistan. Knowledgeable U.S. sources in Washington have confirmed to this writer that Amb. Evans was being recalled because of his candid remarks on the Armenian Genocide. Neither the Ambassador nor the State Dept. has made any public comments regarding these developments.

It is noteworthy that during a hearing before the House International Relations Committee last month, Cong. Adam Schiff (Democrat of California) asked US Secretary of State Condoleezza Rice several pointed questions regarding Amb. Evans. Cong. Schiff asked that Secretary Rice explain in writing if the State Dept. played any role in the reversal of the decision to grant Amb. Evans the

"dissent" award. Cong. Schiff also asked the Secretary State to assure the House Committee that the Department of State has not taken, and will not take, any punitive actions against Amb. Evans for speaking out about the Armenian Genocide. Secretary Rice has not yet responded to these questions.

Amb. Evans has taken a principled stand for which he is sacrificing his diplomatic career. Even if it is too late to reverse the State Dept.’s decision, Armenians in general and Armenian-Americans in particular need to express their objection to the State Department’s punitive action against a distinguished diplomat for telling the truth about the Armenian Genocide.

Unless Armenians take a strong stand, they would be sending the wrong signal to the U.S. government that the Armenian Genocide is not an important issue for them! If they remain quiet on this occasion, never again would another U.S. diplomat dare to speak up on the Armenian Genocide, knowing full well that he would jeopardize his career and no one would care.