Does it concern you??

This was posted on nanyaar.wordpress.com

To Whomsoever It May Concern

This is to hereby inform that a tragic incidence of an Indian national’s death has taken place on April 20, 2006 at 1:00 pm in Yerevan Armenia .Which to eyewitnesses appears to be due to medical negligence. There were 4 eyewitnesses of Indian nationality and six witnesses of Armenian nationality and three witnesses of Syrian nationality. According to all Indian and Syrian national witnesses, the demised was alive and communicating, requesting help for at least 45 minutes and breathing his last. All the witnesses affirm that the ambulatory service arrived too late to help him in any form whatsoever. Following this unfortunate incident all Indian students demanded clarification for the Rector (equivalent to Vice Chancellor) but were given no satisfactory explanation. Students who were agitated by this act decided to go to Armenian parliament. During the protest March, when all Indians were moving towards the parliament there was no Indian official present from the Indian embassy in Armenia. It is more than 48 hours now as this application is being written and there is no official statement from the Indian embassy in Armenia yet on the sad incidence. We nationals of India studying in Armenia demand from the Indian embassy to give an official statement on the incidence and the results of the investigations which have taken place , who is in charge of the investigations and what are the requests which the embassy has made to the government of the republic to Armenia to avoid occurrence of such incidences in future . We Indian students in Yerevan state medical university, Yerevan, Armenia request the authorities to protect our civil rights as Indian nationals and enlighten us .Being the largest Indian population living on the Armenian land we hope that our pleas would be considered. Oblige us bye acting, we all are Son’s and Daughters of India. 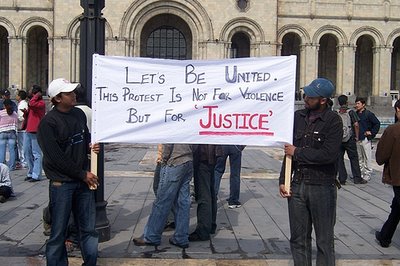 - An Indian student Prashant Anchalia falls from 6th floor of 7th corpus
- Immediately ambulance service is called for Ambulance arrived 40 min late
- A doctor our dean does nothing to take measures to help the injured boy & students were also prevented to help
- Ambulance without 1st aid equipments arrives after 40 min
- Boy is not taken to the nearest hospital
- He dies due to medical negligence
- Attending doctor at the hospital mentions he could be saved if he was brought 15 mins earlier
- Embassy was immediately informed about the incidence
- No representative arrives at the hospital for the next 2hrs
- In the hospital Pro-Rector asks the students to come to university
- All Indian students gathered at university
- Rector ( chancellor) arrives
- Students demand explanation
- Rector showing no situational discretion pours out provocative remarks against Indians
- This provocates students to go out on streets
- There is a protest march towards the Armenian parliament
- No embassy staff arrives yet to safeguard the students & to curb them
- Protest in front of parliament continues for more that 3 hrs yet no response from the embassy
- 4 Indian students permitted to go to the parliament in absence of an official representative from the embassy
- After 1 hr students come out of the parliament stating that they have informed the parliament about the current situation, course of events which had occurred before
- After 1 hr with Pro-rector, representative of Indian embassy arrives
- For ½ hr Pro-rector & representative talk with Indian students
- Ambassador finally arrives after 8 hrs of the sad incidence
- Ambassador goes to parliament
- After an hour ambassador comes out asking students to come to the university
- At 11 pm students turned back towards the university
- There is a meeting with the deputy speaker, educational minister & Indian ambassador
- After along discussion no assurance is given & the students come out afraid & unsatisfied at the early hours of morning


Request to the concerned authorities :-