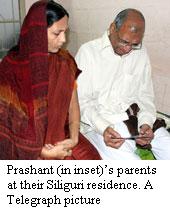 Siliguri, April 21: A 22-year-old youth from Siliguri, who was studying in Yerevan State Medical University in Armenia, died after a fall from the sixth floor of a building.

Prashant Anchali reportedly committed suicide by jumping off a building of the university at 1.30 pm Armenian time yesterday. The Anchalis, however, suspect that Prashant had been murdered.

The Indian embassy in Armenia had called up the family on Church Road here last evening to give them the news, said Pankaj, Prashant’s elder brother. “They said it was suicide, but we don’t believe it. We suspect he was murdered.”

“No official intimation has as yet come from the university even 24 hours after the incident,” he added.

An Armenian news website that had covered the incident stated: “...Indian student of the Yerevan State Medical University, Sandi (his nickname) Anchali, fell down from the 6th floor. He died 5 minutes later after being taken to hospital.”

Pankaj and his family suspect that Prashant’s roommate in Armenia could have had a hand in his death.

“He (the roommate) had borrowed a few hundred dollars from my brother and did not return it. It’s quite likely that Prashant had an altercation with him over this. My brother was not the type to commit suicide,” Pankaj said.

The news site, too, seemed to agree. “Many of the students claim that he (Sandi) was a psychologically balanced boy and couldn’t have committed suicide. Others say that it could be a murder as Indians are disliked in Armenia,” the site stated.

Last Wednesday, an Indian woman medical student at St Petersburg in Russia was the victim of a racist attack.

Prashant’s father Parasmal said his family has written to the President, the Prime Minister and the Lok Sabha Speaker asking them to intervene.

“Prashant had called us up the previous day and said he wanted to go to Canada to explore opportunities as a doctor there,” the weeping father said.

Prashant’s death has given rise to a discord between the Indian students and the university administration.

According to the website, police had not allowed the students to give first aid to Prashant. Besides, the ambulance, that arrived 50 minutes later, was without a doctor, necessary medicine and oxygen.

The students had also approached the rector of the university, Gohar Kjalyan, but the latter allegedly insulted them instead of offering help.

The site said 800-odd Indian students of the university had launched an agitation in front of the Republic of Armenia Parliament with posters demanding the immediate resignation of the rector.
Posted by Ara at 4/22/2006 05:52:00 AM