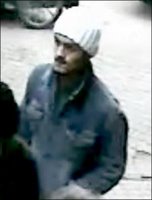 The teenage boy suspected of fatally shooting an ethnic Armenian journalist confessed during initial questioning that he killed the man, a local prosecutor told a state-run news agency on Sunday.

Ahmet Cokcinar — a prosecutor in the city of Samsun, where the boy was caught — told the Anatolia news agency that the teenager confessed to killing Hrant Dink.

Ogun Samast, who is either 16 or 17 years old, was caught Saturday after police acted on a tip from the boy's father after his picture was broadcast on Turkish television, senior officials said.

Samast was caught on a bus as he was apparently traveling from Istanbul, where the shooting took place, back to his hometown of Trabzon, Istanbul Gov. Muammer Guler said.

Dink, the 52-year-old editor of the Turkish-Armenian newspaper Agos, was gunned down outside his newspaper's office on Friday.

Prime Minister Recep Tayyip Erdogan said Samast was arrested with the gun believed to have been used in the killing. Video footage showed paramilitary police at the Samsun bus station inspecting a pistol and then placing it into an evidence bag.

Guler said Samast's father had turned him in.

Most Turks assume Dink was targeted for his columns saying the killing of ethnic Armenians by Turks in the early 20th century was genocide. Nationalists consider such statements an insult to Turkey's honor and a threat to its unity, and Dink had been showered with insults and threats.

Turkey's relationship with its Armenian minority has long been haunted by a bloody past. Much of its once-influential Armenian population was killed or driven out beginning around 1915 in what an increasing number of nations are calling the first genocide of the 20th century.

Turkey acknowledges that large numbers of Armenians died but vehemently denies it was genocide, saying the overall figure is inflated and the deaths occurred in the civil unrest during the collapse of the Ottoman Empire.

Samast was caught after television stations across Turkey broadcast on Saturday a purported photograph of him caught by a security camera about two blocks from the scene of the crime in Istanbul.

Guler said earlier that Dink's secretary had identified the young man in the photograph as the same person who had requested a meeting with Dink the day he was killed, the Anatolia news agency reported. The man said he was a student at Ankara University, Guler said.

The request was refused, and the secretary said she saw him waiting in front of a bank about an hour before Dink was killed, Anatolia reported.

Guler said Samast was born in 1990, but did not release his exact age. He said the teen was being brought back to Istanbul for questioning along with six other suspects from Trabzon.

Police were investigating whether the teen acted alone or had ties to a group.

The suspect's uncle Faik Samast told private NTV television that he didn't think his nephew was capable of acting alone.

"He didn't even know his way around Istanbul," Samast said. "This kid was used."

Threats and violence against Turkish editors and reporters is not uncommon. Well-known journalists commonly receive police protection and travel around Istanbul with bodyguards. Dink was alone when he was killed.

Guler rejected accusations the government did not do enough to protect Dink.

"Because he didn't request protection, he didn't get close protection," he said Saturday. "Only general security precautions were taken."

Mourners held a vigil at the spot where Dink was gunned down. Many in the crowd, which included Turks and members of Istanbul's small Armenian community, had pictures of the slain journalist pinned to their chests.