They Went to Make Artsakh Strong 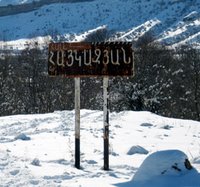 “If you want to taste suffering, come and live here for a few days,” said teacher Khanum Zakoyan.

The Kashatagh region in Nagorno Karabakh has caught the attention of several Diaspora organizations (See: Is It All Hopeless?)

On New Year's Eve, the Shahan Natali Family Foundation launched the program "From Hand to Hand" in Kashatagh. The aim of the program is too ease the condition of poor families in villages throughout the region, solve electricity problems in some of the villages, and by drawing Diaspora attention to the region, demand that the Karabakh government develop and implement a policy regarding resettling the liberated territories.

“The program's aim is not only to help families in dire conditions, but to spread awareness among the population of Karabakh. Ordinary Karabaktsis do not know what is going in the liberated territories. They understand the strategic importance of these territories, but they never imagined what they saw in the villages we visited," said Ara Manukyan, who represents the foundation.

With money collected in United States, the foundation distributed New Year's gifts to the children of Haykazyan and Hale, and provided monetary support to 16 families. The money was distributed by 16 visitors who came from Stepanakert, Shushi, and Martuni. 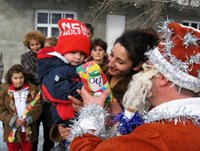 Ira Khachatryan from Martuni, who lost her husband and two sons in the war, was shocked to see young children sleeping without a bed and blankets. "If I had known I would have brought several blankets with me," she said.

The children of Haykazyan saw Santa Claus for the first time, and the day turned into a special holiday for them. The villagers gathered and celebrated New Year with the visitors. 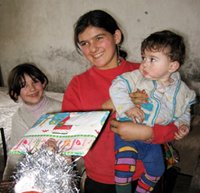 The village of Haykazyan was founded in 1997; at the time there were 60 families living there. (See: Nine Years with No Electricity)

Today there are only nine families left.

"The situation is bad. I'm amazed that people can live like this. This is heroism. I met with the Minister of Karabakh's Territorial Government and Infrastructure Development, Arno Tzaturyan, to discuss this situation. He said that the people should leave. I replied that No, we would help so that people stayed there. I had a feeling that the government is doing whatever it can so that people will leave, " Ara Manukyan said.

"First, those people who can't serve the nation have to leave. We must promptly provide the population with most vital necessities, such as electricity, power, education. We must have a program on resettlement of the liberated lands, and the current Karabkh government does not have one and doesn't want one. In November Arkady Ghukasyan promised in Los Angeles to make changes within a month. These changes didn't happen, and it seems they won't happen in the future. The Diaspora and the people of Karabakh have to force the government to do its job,” Ara said.

"Living conditions are bad, houses are falling down, if it continues like this the village will be empty," said Armen Chmoyan, head of the Haykazyan village administration.

"The villager has land, but no equipment to cultivate it, but this doesn't bother the powers that be. We constructed a small lake next to the Vorotan River, but it was left unfinished, since there is no money. We could breed fish. If the government would help us a little, with one million drams, we would have already finished it, " said the village head.

"We've lived here for eight years, but nothing has changed. We barely survive. If only they paid a little attention—a little bit, we don't want much—we would do the rest. At least install electricity. For women, electricity is the most important thing. We heat the iron in the oven, and wash clothes by hand," said Gyulnara, a teacher of geography and history. She has three young children.

"We fixed up the house. It was falling apart. We keep livestock, cultivate the land. We didn't receive any help from the government. There is not even a store here. To buy food we have to go 55 kilometers to Goris or 80 kilometers to Berdzor, so we can buy sugar or soap. We can't sell what we produce either. If we take meat to Goris, it costs us 500 drams per kilo,” Gyulnara said.

"If you want to know the taste of suffering, come and live here for a few days, " added teacher Khanum Zakoyan.

Her husband Gevorg Martirosyan is the director of the Haykaz Khachatryan elementary school. The school has 45 students, some of whom come from the neighboring villages of Hale and Janfida the Sanasar and Zinavan army bases.

"I said, It's the land of our grandfathers, we liberated it with blood, let's settle there. We came, and they said in the fall there would be electricity. Nine years have gone by since then, and there is no electricity. When we came, they gave teachers 40,000 drams and said, go and build your houses. My relatives say, Gevorg is crazy. Why is he staying there? " says Gevorg Martirosyan.

"Why are we punished this way? We have a right to live too, don't we?” asked Khanum Zakoyan. “We are a family of teachers, we came from Gyumri to strengthen Artsakh, but every year they lie to us that they'll bring electricity. We are now doctors, shoemakers – we do everything, but we are not going to live forever, are we? I am a mother of five, and now we have to light candles and sit together. For who and for what are we sacrificing our lives?”