With all going on my life, the following story I missed that was posted on Sassna Dzrer.

CONSTRUCTION OF KARS - AKHALKALAK - BAKU RAILWAY TO BEGIN THIS JULY!!! 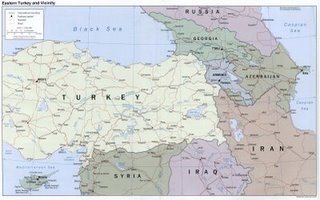 According to a variety of media reports, construction of the controversial railway linking Turkey and Azerbaijan, via Georgia, will begin by no later than July 2007.

Georgian Economic Development Minister, Giorgi Arveladze, is quoted as saying that an agreement on the details of the new rail link was reached this past Sunday in the Georgian capital of Tbilisi.

The 285 kilometer project, which will take an estimated two and one-half years to complete, will start in Kars, Turkey and end in Baku, Azerbaijan. It will bypass Armenia completely and will not utilize the old Kars - Gyumri railroad.

Neither the United States nor the European Union will finance the project which is estimated to cost some USD 400 million. Turkey and Azerbaijan will pay for most of the construction costs, with Georgia later paying for these loans through transit fees.

Matthew Bryza, U.S. Deputy Assistant Secretary of State for European and Eurasian Affairs commented on the railway agreement by stating that,

"Of course, we would like the railway, which connects Turkey with Baku, to pass through Armenia, since it reflects our policy. Second, from economic point of view it is more expedient to connect Turkey and Georgia through Armenian territory. But we cannot make decisions on that issue. Investors themselves push forward investment plans, which are more profitable for them. If Azerbaijan, Turkey and Georgia want to construct a railway, of course, we cannot object. But we do not particularly support that project. We hope that in near future we will see such a transportation scheme, which includes all the countries of the region ."

“All throughout history the commencment of railway construction tended to be a prelude to war. A fine case in point, WW1... Berlin-Constantinople-Baghdad.”

I have to agree with the comment and would state my concern with what the criminal governments to the West and East of us are doing, which is once again preparing for war against us. And to the North of us is the legendary Christian whore of the Caucasus Georgia, who will hop into bed with anyone who will give them a little economic gratification for their tricks.

I’m also bothered by the U.S., who once took a very strong stance on this issue, stating that it goes against all they believe in and will cause instability in the region and now simply state officially that “…we can not object.”

If the U.S. is so concerned with stability in the region, then instead of rewarding Georgia with economic aid and kissing their asses, put your foot down and sanction them for going contrary to your wishes. In fact do the same for Turkey and Azerbaijan, as it's obvious they have money to build a railway and don't need the millions you give them year after year.

I hope someone at the Armenian Assembly and the Armenian National Committee in Washington D.C. will pick up on this latest development and act accordingly.
Posted by Ara at 1/21/2007 10:38:00 PM