Scandal in Turkey as police pose with journalist's alleged murderer

ISTANBUL (AFP) - The Turkish security forces face fresh embarrassment after it emerged that some of its members had posed for "souvenir pictures" with the alleged murderer of Turkish-Armenian journalist Hrant Dink.

Film footage and photos leaked to the media showed 17-year-old Ogun Samast, who has confessed to the murder, displaying a Turkish flag, flanked by members of the security forces, some of them in uniform.

Behind them is a calendar featuring another Turkish flag and the words of the country's founder, Ataturk: "The motherland's soil is sacred. It cannot be left to its destiny."

The images were taken at the anti-terror department in the northern city of Samsun, where Samast was captured 32 hours after Dink was gunned down in central Istanbul on January 19, officials said Friday.

Dink, one of Turkey's most prominent ethnic Armenians, was loathed by nationalists for saying that the massacres of Armenians under the Ottoman Empire amounted to genocide, and was last year given a suspended six-month sentence for insulting "Turkishness."

The press was up in arms over the images and some newspapers suggested they indicated that certain members of the security forces sympathised with Samast's alleged ultra-nationalist motives and have treated him as a "hero." 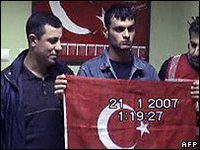 "A kiss on the forehead is the only thing the murderer was not given," growled liberal paper Radikal. "This is the picture of the mindset that killed Dink."

"Shoulder to shoulder with the gunman," trumpeted the mass-circulation Sabah newspaper, while the popular Vatan said the images were "as grave as the assassination itself."

"The footage proves that the murderer and his associates are not alone, that their supporters... have penetrated all segments of the state," Radikal's editor-in-chief, Ismet Berkan, wrote.

The police are already facing allegations that they had received a tip-off last year about a plot to kill Dink but did not follow it up.

They are also under fire for failing to grant Dink special protection, even though the journalist mentioned in articles in his bilingual Turkish-Armenian weekly Agos about receiving threats and hate mail.

Samsun's chief prosecutor Ahmet Gokcinar said he launched an investigation into the officers seen in the pictures on charges of commending crime and criminals and misconduct in office.

They belonged both to the police and a paramilitary force which is policing rural areas, he said, adding: "We will do what the law requires without delay."

The Anatolia news agency, citing interior ministry sources, later reported that eight police officers from Samsun had been dismissed from their posts.

Apart from Samast, seven other suspects have been arrested over Dink's murder, all young people from the northern city of Trabzon.

The nationalist stronghold has come under the spotlight with a series of violent incidents, including the murder of an Italian Catholic priest by a 16-year-old boy last year.

The probe has so far suggested that the suspects did not belong to any known underground group but were under the sway of ultra-nationalist ideas and wanted to take the law into their own hands against what they saw as rising threats to Turkey's unity.

Despite the controversies, Dink had won respect as an earnest campaigner for Turkish-Armenian reconciliation and about 100,000 people marched at his funeral.
Posted by Ara at 2/03/2007 11:34:00 AM