The Court is Soft on Human Trafficking 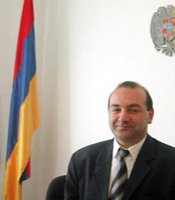 On November 11th in Echmiadzin, the Court of First Instance of Armavir announced its ruling in a case involving trafficking in women. That day, Judge Tigran Petrosyan gave three of the defendants in the case very light sentences, based on Article 64 of the Criminal Code, which is to be used only if there are mitigating circumstances, for example, when a defendant has assisted in solving a crime.

Patvakan Malkhasyan was charged with two violations, of the Article 262, Section 1 (Organization of prostitution, pimping) and Article 132, Section 2, Point 1 (Human trafficking); the prosecutor requested a prison sentence of five-and-a-half years. The court, however, sentenced Malkhasyan to only two years, citing Article 64, apparently in response to a document presented during the trial stating that Malkhasyan had three persons in his care and suffered from bad health.

In 2002 Malkhasyan worked for his sister in Dubai, transporting women to discos, hotels, and cafes and ensuring their “safety”. When he returned to Armenia, he started sending his sister new girls.

Two victims testified during the trial—S. M and R. K. However, one year ago when we visited Anahit Malkhasyan's rented apartment/hostel and interviewed the women who were working for her, we met three other women who her brother had brought to Dubai. Defendants Nanasil Arakelyan and Tamara Makarova had tricked the victims into prostitution, promising them babysitting jobs in Dubai. In Dubai, Anahit Malkhasyan took their passports and forced them into prostitution. The victims had never engaged in prostitution before. Both were divorced, and found themselves in an extremely dire financial situation. The defendants made use of these circumstances to ensnare the women in their net. One of the women described in her testimony the cruel treatment she had received from Anahit Malkhasyan and her Arab colleagues.

Defendant Nanasil Arakelyan had been convicted twice before for similar crimes. The only one whom the court sentenced as the prosecution had requested, he will serve five years and four months.

The prosecution sought five years in prison for Tamara Makarova, but the court, though it found her guilty beyond a reasonable doubt, sentenced her to only two years. The only mitigating circumstance in her case was that she had no prior convictions.

Simon Nersisyan brought women to Dubai via Moscow. He was charged with violating Article 132, Section 2, Points 1 and 4; the prosecution requested five years. Again, based on Article 64, the court gave him only two years.

“The court obviously gave a mild sentence to the three defendants. For us it was shocking and illogical that Article 64 could be applied to people who have committed such serious crimes. I don't see any mitigating circumstances; the court shouldn't have used Article 64th. We will appeal,” said Senior Prosecutor Armen Boshnagyan of the Anti-trafficking and Illegal Immigration Department of the Office of the Prosecutor General.

These mild sentences can only be explained by the fact that the defendants are representatives of the Armenian sex trade business and have influential sponsors. We will find out once the complete sentences are released what the mitigating circumstances were that the judge took into the account as he handed down such light sentences to the three defendants. We might even find out that these men are war veterans or have performed services for the Court of First Instance of Armavir. As we have noted in the past, a large number of the Armenian pimps in Dubai come from Echmiadzin. The cases against them, the investigations into their activities, and our own sources all suggest that these pimps have an army general from Echmiadzin standing behind them. Some months ago, it was this man's interference that allowed the early prison release of Marietta Musayelyan, a notorious pimp from Echmiadzin. According to our sources, the same general also asked the judge for a milder sentence for Dbr Ano's brother Patvakan Malkhasyan.

Since Judge Tigran Petrosyan is also a member of the judiciary committee, we expect that his recent rulings may be a topic of discussion at their next meeting.