Today was my friend Jerig’s 40th day of his death. We went to pay our respect on the day they say that ones soul leaves earth forever.

It seems that Jerig was not doing well at all since the day I saw him before leaving for America and just before his death and a day after his 28th birthday, Jerig started to bleed from his kidneys.

On September 3rd, Jerig’s condition got much worse and when he was too weak to refuse treatment, his parents rushed him off to a hospital that they had called who said they had Jerig’s type of blood which they could give him a transfusion upon his arrival.

According to one of Jerig’s uncles, they got to the hospital and they could not find the blood that they were to give to Jerig. I’m guessing from what was said, they were waiting for some money.

It took quite a bit of time before they finally could “locate” the blood Jerig needed to save his life, but of course we now know they were too late.

We sat in the yard of his parents house and drank a cup of Armenian coffee and ate pastries before leaving for the cemetery.

As we got up to leave for the cemetery, I approached Jerig’s mom, who had been in the house. When we made eye contact, she began to cry.

It was a very emotional moment for both of us and as she cried, she told me what had happened, in the last days and how Jerig was living with the hope that upon my return from America we were going to get him the needed treatment he needed and was entitled to. Unfortunately Jerig’s condition worsened at the wrong time and I was not in Armenia to squeeze the blood he needed out of the doctor himself when he needed it.

Jerig’s mom came with us in our taxi to the cemetery and on the way she told us of how Jerig felt really bad he could not be at our wedding. She said that he planned on building us a sofa for our home once he got better as a wedding gift.

He had asked his father to bring him a slab of stone as he was going to carve a stone cross that he planned on taking to his village of Spitagashen, Artsakh to place at a holly place were together we would celebrate his recovery and in the Armenian tradition, sacrifice a lamb as a sign of thanks to God and give the meat to the less fortunate. 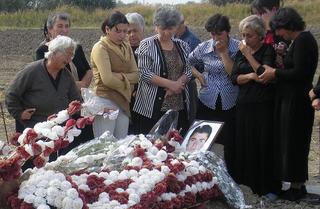 Jerig had some big plans, but unfortunately on September 4th he bled to death in an Armenian hospital waiting for a blood transfusion.

At the meal following our visit to the cemetery, the toastmaster said that it is the 40th day and Jerig’s soul has now left earth. We must not forget Jerig, but the living have to continue on with their lives.
Posted by Ara at 10/14/2005 06:29:00 PM