Just another heart attack in Armenia

Tonight my wife and I paid a visit to an old family friend from New York who while we were visiting the Saturday before last, fell off a chair and broke her hip.

A few minutes after she fell and we determined that she could not move, we called and ambulance and took her to the Erebuni hospital, where they operated on her two days later and then the following day transferred her to the Nairi Medical Center. 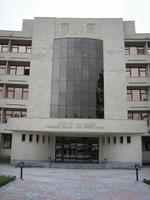 The Nairi Medical Center is a former government owned hospital which was privatized for literally pennies on the dollar and word at that time and even now is that Bella Kocharian, the first lady has some ownership of this privately owned medical center.

Anyway, just for the sake of our friend having a nurse by her side 24/7, they placed her in ICU. When we visit her room, we have to wear a white robe and all look like doctors and laboratory technicians.

Today when we stopped in to see her, there were quite a few familiar government people standing around in the waiting room.

I asked our friend’s nurse who was admitted into the hospital that all these government people are waiting for outside? She told me she didn’t know, but it was someone important and they had a heart attack.

At some point, our friend’s doctor came in to check on her and asked us to leave the room.

We went out in the waiting room and as we entered, I noticed a few familiar bodyguards standing around who I’ve seen when the Prime Minister moves around. I then looked over my shoulder to see the Prime Minister, Antranik Markaryan walking out of ICU into the waiting area, where he went over to talk to some other official.

Markaryan always looks the same to me. He has a big fat neck and he top button is never buttoned, resulting in his tie being hanging in the air

A few minutes passed and out from ICU walked Hovig (the mouse) Abrahamyan who walked passed us in a rush towards the rear exit of the hospital and was followed by the Prime Minister.

We waited quite a bit for our friend’s doctor to come out so we could return and talked with another visitor of our friend’s who had gone out to the waiting room when we showed up (ICU has a limit of 2 guest at a time) and asked her if she knew who was the person the Prime Minister came to visit? She said that the people in the waiting room were talking among themselves and she understood the person to be the PM’s Chief of Staff who had a heart attack.
Posted by Ara at 10/24/2005 10:41:00 PM