Since Friday, my wife and I have been frequenting the happening cultural spots Yerevan has to offer. 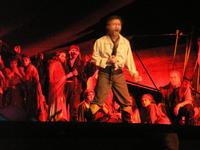 On Friday we were invited to see the opera Aleco. A love story of a man named Aleco, who is married to a woman who is keeping a lover on the side.

In short, Aleco catches his wife a lover and kills them both.

The person playing Aleco is my wife’s vocal instructor and was called at 2 PM to stand in for the person who was suppose to play the part but got sick. In a couple of hour, he learned his part and played his part as if he had been rehearsing for months. I didn’t know about the last minute call until after the performance and only learned as I was congratulating him on a fabulous performance.

On Saturday, we made our way to the Huradzan Stadium for the annual Voski Ashoun (Golden Fall) concert.

This was the first and last time I will attend such an event as it is so anti-Armenian culture. I’ve never heard so many bad lip-sinking artists in my life moving their mouths to Armenian songs that many had an Arabic/Turkish style to. 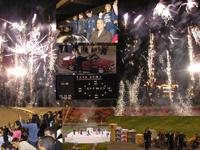 For the most part it looked as if the attendees were from the regions and had not been to a concert in their lives. They were trying to show up each other with their talking on cell phones and doing so while standing up so we could all see they had a cell phone.

The young males in our section were going out of their way to leave and return to their seats over and over again and of course they had to do this while crossing the row my wife and her friend and I were sitting. They did this for most of the performance and made it a point to rub up against my wife and her friend in hopes that they would be noticed by them.

The worst had to be when our need to go to the restroom to relieve ourselves and being told very rudely that if we leave the section we were in, we would not be allowed back in. As a result, we had to hold it in for 2 hours.

The only artist I really knew that could kind of claim to be a singing star would be Sirosho. Like the other artists, she sat in the back of a red BMW convertible and did her lip-sinking as they drove her around the stadium. I was quite disappointed as I knew that she was a much bigger start than the rest that performed and to be a part of this cheesy show would certainly not boost her image.

And how could it not be Voski Ashoun without them raffling off some prizes? They had mixers, irons, cell phones, music centers, television, microwave ovens, DVD players, a washing machine and refrigerator. We didn’t win anything.

The fireworks show was quite impressive and though the majority of the show sucked, this part kind of made up for some of our suffering.

Tonight, we went to see the opera Anoush. What a great and lively opera and though a bit long, I have to say that it was worth going to see.

Though it seemed like all of Yerevan was in attendance, we were able to get tickets at the door and did so when we were looking for the ticket booth. I asked some women who was waiting outside where the ticket booth was and she said that she had some extra tickets that she was selling.

I asked the women how much the tickets were and she looked to her friend and asked if they were 1,500 dram (a little over $3)? Her friend said she thought so and we purchased 2 tickets which were in row 3, seats 8 and 9.

It seems that these were complimentary tickets from the director of the opera and the seats behind us were going for the less important people for the price of 4,000 dram ($9 each).