One of the frequent meals in our house is spaghetti with ground chicken meat-sauce which we have been eating with madnakash bread, the most common bread in Armenia.

The other night we invited guests over for dinner and my wife decided that we would serve spaghetti with ground-chicken meat sauce.

We went to the store, got the spaghetti, Ararat Valley tomato paste, ground chicken and when it came time for the madnakash, they were out. They offered to sell us some lavash, but what is spaghetti with lavash?

After panicking, knowing that dinner would be ruined, we went to a neighboring store where they have a section that sells bread and pastries, but not the greatest madnakash, we discovered they had what looked like French bread. A little bit pricy (35 cents as appose to 22 cents for madnakash) we decided that it was probably better than their madnakash.

While cooking up the meat sauce and boiling water for the spaghetti, it came to me that we had a big jar of garlic powder that our reader and now good friend Dawn had sent for her son Dan when he was here last year studying martial arts at the ABBA studio in Stepanagert and the garlic powder and other spices she sent him didn’t arrive until he was about to leave the country, thus Dan gave me the garlic powder. 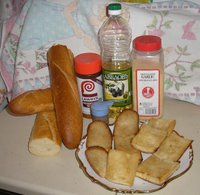 Well having French bread and garlic powder, inspired me to try my hand at making garlic bread, since naturally spaghetti with garlic bread is the real way to serve such a meal.

I rushed back down to the store and got a bottle of olive oil and in no time my first try at garlic bread produced results.

The guest that night loved this new kind of bread and since then, we have been making garlic bread almost everyday since it in itself is a meal.
Posted by Ara at 11/29/2005 11:37:00 PM