Teach them how to kill 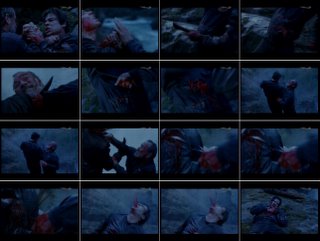 Tonight’s lesson from Shant Television is how to kill and do so with homemade knife.

Yes, this is the most blood that I have so far seen on Armenian public television.

I’m not sure the name of this movie, but will say that it was shot in America and had a Russian voice over.

All I know is that this is certainly not the kind of public television we had access to in Los Angeles when I was growing up and I would suspect you still can’t access this on the public airwaves there or anywhere in the U.S.

The question that comes to mind now is that what is it that we need to do to prevent this crap from corrupting the minds of our population? Do we ban it? Do we educate people to what is out there and the effects it can have?

They had an advertisement for their programming for all the great soft-core films, which I found out airs Friday to Sunday at 1:15 AM. I guess you would not want to broadcast the sex stuff on a school night would you.

So who is Shant Television?