Voting Day for the Constitutional Referendum

Today was voting day for our first constitutional referendum.

This afternoon I went out with my wife for dinner and came across a couple of gatherings which were related to today’s voting.

The first one was a concert that was being held in the opera square and was youth singing and dancing their little hearts out. Unfortunately, there were never at any point more than 100 people watching. 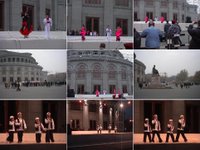 So why were they there giving a free concert? It’s so the vote no for constitutional amendments people won’t have a place to have a meeting to report to the people what is going on with the elections.

On the other side of the opera which is the street side, was a gathering of the vote no people. There was a crowd of about 2,000 people, among them was probably a couple of hundred undercover police/KGB, who were sticking out among the mostly elderly people.

So here is what happened today. 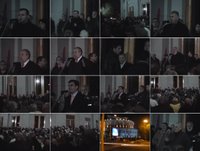 The Central Electoral Commission has reported that 64.4% of the eligible voters have cast their vote and 88% of them have voted YES to constitutional amendments.

According to Raffi Hovanessian’s organized unofficial monitoring team, which consisted of 8,000 people, who were counting how many people physically went to cast votes at all the voting places, somewhere in the neighborhood of 350,000 have actually cast votes, as appose to the over 1 million people the RA government is claiming.

Tomorrow is a meeting at the manuscript library at 15:00, where the 8,000 monitors along with hopefully thousands of others will gather to hear the results of the unofficial monitoring and the real number of how many people voted.

After that, I’m not sure what will happen. I hope that it will not turn into the usual name calling match that these thing have become in the past, which was kind of the flavor of the meeting tonight.

Tonight on H2 television, they reported that at 18:00 there was going to be a meeting at the manuscript library, but no one showed up. They showed video pictures of an empty yard of the library. Reality is that the meeting was in front of the opear and not the manuscript library, as the pictures I've posted show. What are they trying to tell the people? No one cared and didn't show up to the meeting, so don't bother raising your voice? Once again government television misleads the people and so many ways.