Finally Back Home In Armenia!

I remember when I was in school many years ago, I got behind in my homework a few times and had to rush to get caught up. That’s how I’m feeling right now since I really have not made time to write what is going on in our lives over the last couple of weeks.

I’ll give you a brief and we will just have to call it even, okay?

On the 16th, my wife and I took a mini-van ride to Tbilisi on our way to Israel, where we were invited by the Armenian Patriarch (who is my uncle) for a blessing of our union. 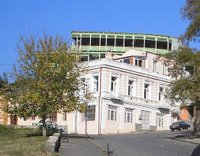 After finding an Armenian taxi driver at the bus station we went to look for a hotel to stay in for a couple of nights and found a $30 a night place in the Armenian section of Tbilisi, which had a fabulous view of the old city. Only thing that was not all that nice was that we were on the 5th floor, the place was so filthy that you could not walk around in your socks and the single-pain windows allowed the street traffic noise to sing you to sleep. The plus was the unobstructed view.

I took a bunch of pictures at night and discovered on my $144 Olympus digital camera the Night Scene mode. Incredible!!! I took a couple of dozen pictures of things that were practically black to the human eye, but after the shutter being open for a few seconds, wow!!! There are so many churches and they all look Armenian, but of course are not. I’m really not sure which ones are other than a couple.

On the 17th, we paid a visit to the Israeli embassy and picked up my wife’s visa. It was a very simple process and took in all a couple of hours.

Between dropping off the application and picking up the visa, we went to Mc Donald’s for a late breakfast, early lunch. Of course I was not impressed with the food, which I thought was a bit pricy, but I have to say that the staff was very friendly and any child that entered this fine Western establishment was presented with a toy.

The part of Tbilisi we saw was very nice in a sense that it had a nostalgic touristy look to it. Everything was old. Unfortunately it was also very dirty, with trash everywhere. As dirty as Armenia is, it is much cleaner than what we saw in Tbilisi.

Since we had time to kill, we decided to ride the metro which there was a station near our hotel. The metro is just about the same as it is in Armenia, only difference is that they have 4 cars running at a time (we have 2) and they come every couple of minutes to transport the hundreds of people waiting. It cost about the same as what we pay in Yerevan.

Many, many, many of the Georgian’s spoke Armenian. They even look like Armenians, but when asked, they proudly state that they are not Armenian but Georgian. A few people we met said that they were married to Armenians.

On the 18th, or taxi driver Alik showed up to our hotel at 7 AM and drove us to the airport to catch Georgian Air flight 695 to Israel.

On the way we drove passed President George W. Bush Street , which was announced by a billboard-style sign which read "President George W. Bush Street," written in Georgian and English. It included a large photo portrait of a waving Bush. I could only laugh when I saw it, but unfortunately didn’t get a picture of it. On the way back (last night), we passed another sign which a light up sign with the name of the street that also had an American flag. What a shallow jester in order to brown-nose the Americans. Our taxi driver told us that Georgians are known for selling out to the highest bidder.

The road to the airport was very nice and according to Alik was also very new. It was repaved very fast in order to receive Bush on his visit in mid-September. He said that it may look nice now, but according to a friend of his who worked on the road, the 100 kilos of cement that was to be mixed with the 1 ton of asphalt is missing. This is what is used so roads will harden. He said we should come back next year and see what condition the road is in. I guess Armenians and Georgians think alike in this area. I’ve never seen cement added to asphalt and this also would explain why in the summer when you jack up your car on the Lachin road, the jack sinks into the asphalt.

Anyway, we got to the Airport and waited 3 hours for our flights. While doing so, we watched the operations of the airport and all I can say is that the Georgians can learn allot from the Armenians in terms of how to run things. 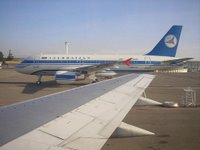 We boarded our plane and parked next to it was a plane from Azerbaijan.

The flight to Israel was 2 hours and 30 minutes.

It’s very clear from what we saw while we were in Georgia that Georgians are lazy people don’t care much for the future of their country. They have so much potential and if that Armenians had what they have to work with in terms of location and resources, that place would be a very modern and prosperous place.

Our return to Armenia via Georgia was quite uneventful. 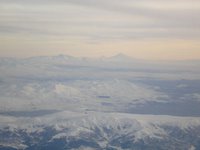 The view from the airplane coming in was fabulous. From the air in the distance, you cold see Armenia. Ararat and Aragast were quite visible.

We landed in Tbilisi at 5:30 PM, where Alik our taxi driver was waiting for us. He rushed us off to a waiting van that took us to the boarder crossing, where there was a very long line of cars and trucks to cross the boarder. 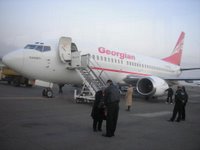 I walked to the front of the line and found a car that was empty and talked the driver in to taking us with him. He had been waiting for over two hours to cross and it seems that a couple of days before there was a big bust which cleaned out the place of customs agents. After transferring to the car, we were back on Armenian soil in 20 minutes and on our way home.