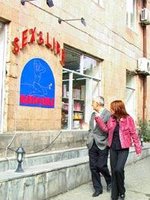 I often can't believe how fast this city is moving, lots of construction and business development everywhere, but for what price? Now we have an adult sex shop in Yerevan. God, when will this twisted imported evil and influence stop?

In what some praise as liberation, while others warn of sure iniquity, a "sex shop" has opened in the center of Yerev. "Sex and Life" is not the republic's first "adult accessories" boutique, but it is the only. Two others had short lives in the mid 90s, but closed amid public disapproval, mostly from elderly.

Now, 28-year-old sex aide entrepreneur Petros Movsesyan is hoping times have changed enough to sustain his new business, which opened at the beginning of this month near the Cascade.

"The shop now serves as a museum," says Movsesyan, laughing. "People come here as if it were a museum.They enter in a group, laugh at one or another assortment, but then they come separately to make purchases. There were women who phoned us to make sure there was no one in the shop, then entered and left quickly."

Besides "toys of pleasure" for men and women the "sex museum" also has special women's lingerie and perfumes, as well as different sexually-oriented novelty gifts. And the queen of the shop is the inflatable doll hanging on the wall for 17,000 drams ($40).Sex toys from $10 to $70 come from the US, Germany and China.
Posted by Hakop at 11/08/2005 09:12:00 PM