Armenian talent… 3 out of 4 isn’t bad

In the last couple of days monitoring Armenian public television and looking out my window, I have seen quite a bit of Armenian talent.

A couple of nights ago on H1, they had the young and very talented violinist named Serge Khachadouryan, who preformed in Belgium. An incredible talent that we should all be very proud of.

When he played, my wife and I were glued to the television as well as those in attendance at his concert, which from what I understood included royalty and/or heads of state. 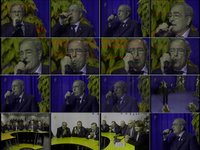 Over on ALM, we had Dickran Garabedyan singing and whistling. My wife’s cousin could only laugh as Dickran sang with what looked like all his heart. My wife’s cousin said that this guy really is a choban. I asked him if he meant hoviv which means shepard in Armenian? He said no, hoviv is different than a choban, which is understood as an uneducated Shepard. Garabaedyan is a choban and his flock are all those villagers who love him for giving them the time of day and follow him like lost sheep.

According to my wife, this is a guy who thinks he can sing, but in reality he can’t and people only watch his talent program just to get a good laugh. 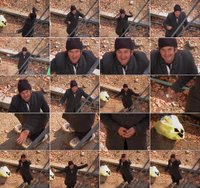 This morning we heard outside our window singing. When we looked outside there was a man under our building who looked to be about 50 years old (my wife insists that he was much younger, but looks older because of the hard life he has). He was singing Sayat Nova. My wife dropped from the window a greenback which he thanked us for and started to sing a song called Dzaghigner (Flowers). It could not have been a better song for him to sing, as from my interpretation, it is about how God gives some people wealth and others poverty. I’m going to transfer the video I shot of this song onto a format that I can e-mail. For those interested in a copy, please e-mail me at: ara_manoogian@yahoo.com and I’ll send you off a copy.

Just a side note on this guy. When I left the house, he had made his way down to the next building which is close to the trashcans and with him it looked like his wife, who was picking through the trashcans and looked to be picking out paper and things that could be burned to keep warm.

Then we have the up and coming talent, Nick. This guy is really incredible and is on his way up. We were at his house for dinner last night and it seems since my soliciting donations for Nick’s new fishing pole (a computer to record songs on), he has written a couple of dozen new songs. 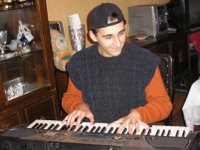 I also found a friend of mine I have not seen in 20 years (I’ve been trying for the last few years to find him), who is a musician who knows all kinds of people in the music business and knows the ins and outs of how to be discovered. He sent Nick a bunch of links and information about what steps to take to get discovered.

Since we are talking about Nick, I want to take the time to thank the two families who responded to my calling for sponsorship for Nick, who collectively have pledged $750 towards Nick’s computer system. This amount is almost enough to get the system that Nick needs and if I can find someone to bring the computer from the states, then it is in fact enough for what Nick needs. Let’s see if I can find someone who is coming to Armenia and can bring a laptop for Nick. In the meantime, Nick is working on my laptop to record a few songs which he will be uploading onto the internet and sending around to a few people.

Anyway, if you ask me, the talent we have seen in the last couple days tells me that with a system in place that allows real talent a chance to show what they have, Armenia does have the potential to be properly represented in the international arts arena.
Posted by Ara at 11/14/2005 11:05:00 PM