Last night I was shocked to see on Shant television (the picture to the right is their logo) what in America would never be allow to be broadcasted on public television.

Last nights film was shot in America and had a Russian voice over.

It was a film about some guy who is cheating on his wife and doing so with a sex slave who he pays and had her sign into a contract with him that she would serve him. 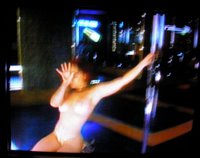 The film had full frontal female nudity, violence of him for his pleasures slapping around his contract slave, scenes in strip bars with topless pole-dancers, sexual intercourse scenes which took place under the covers, as well as the slave placing a condom on the cheating husband using her mouth.

The film was sponsored by Time Square Strip Club which is located at 1 Artsakh Street in Yerevan and also Sigma Poker Club. The strip club commercial was just as bad as the film, with bare breasts and straddling of poles.

I have no objections of adults of appropriate age viewing this crap, but the problem is the younger viewing audiences who undoubtedly know about this programming and stay up late to watch it.

I wonder what the law reads in showing such programs on public television?

I was told by my wife’s cousin, who stays over at our house occasionally that what we saw last night was nothing compared to what they have shown in the past.
Posted by Ara at 11/07/2005 08:36:00 PM