In The Jerusalem Report July 10, 2006 issue they have an article titled "The Azeri Triangle" which is about a delegation from Israel who visited Azerbaijan. The article is quite long and caught my eye as it talks of Israel helping Azerbaijan with its problems in Washington.

What comes to mind is a few things that I've always been wondering and that is, what does Israel have against us?

During the Artsakh liberation war when their was a ban on weapon sales to Armenia and Azerbaijan, Israel was active in selling Azerbaijan missiles/rockets (weapons of this nature). 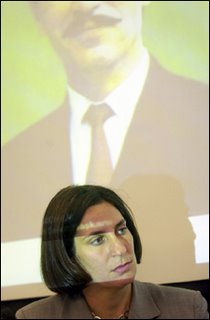 Dr. Brenda Shaffer, director of research of the Caspian Studies Project at Harvard University who lives in Israel was quoted quite a bit in this article. This same Brenda Shaffer I had a chance to attend a lecture she gave in Israel in 1999, which she spoke of Azerbaijan and its neighbors.

I was ready to videotape her talk, the same talk she claimed at the time I could video at the time when she gave it in the states to the Armenian community a few months later (which she never gave). In short she didn't allow me to video and I would say for good reason, as what she had to say was all crap and her arguments were full of holes. Fortunately, my video camera that I put on my lap was running and I got the audio of her attempt to spread misinformation.

In short, Shaffer, the Azeri propagandist went on to talk about Black January, the day the Azeris were stopped by Russians forces from continuing their bloodbath of Armenians (though she never mentioned why the Russian forces were brought in and just that they went in an killed a bunch of people for no reason). According to her, that's when the conflict began in the region.

I'll get around one day to post the audio so you can hear what she said for yourself.


So what does Israel have to gain from helping Azerbaijan? Could a strong Armenia be a threat to the well being of Israel? Could a conflict in Armenia prevent us from moving forward, thus less of a threat to Israel?

I'm not sure, but according to the article, Mark Levin, the executive director of the National Conference on Soviet Jewry, a Washington-based advocacy organization and member of the coalition of Jewish groups that have worked on behalf of Azerbaijan's interests on Capitol Hill, has "worked closely with the administration to implement the presidential waiver of 907 in 2002, and the coalition "continues to express support on a regular basis for the waiver," which is subject to annual review.

For those of you who don't know what 907 is, it is a U.S. congressional amendment to the 1992 Soviet Freedom Support Act, aimed at boosting economic and humanitarian aid to all of the 15 emerging former Soviet republics except Azerbaijan. Passed at the urging of the Armenian-American lobby in 1993, when the Nagorno-Karabakh conflict was flaring, 907 barred the U.S. from military or other cooperation with Azerbaijan.