RIPping up the Rail – Final Chapter

It seems that with the skyrocketing price of fossil fuel, the Armenian government has decided to finish their evil deed of ripping out the final stretches of our electrical above ground transportation system. Yes, the days of electric trolley busses are over. 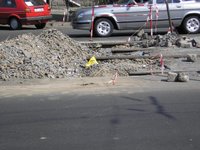 As I write, the rail is be uprooted on Dirckran the Great Street, near Gregory the Illuminator Cathedral and at the start of Gomidas Boulevard.

I guess I should no longer be bothered by these acts of rape to our infrastructure, especially those that make us more dependent on the outside world, but I just can’t get it out of my head that President Robert Kocharian, who is one of those in Armenia that have much to financially gain from fuel sales, is one of those that is also accountable for this CRIME. 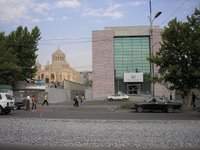 I wonder how much it will cost to reinstall the rail system in the future? I only ask as this will be the price those criminals responsible for this crime will have to pay as part of their punishment when our courts or an international court finds them GUILTY.

Robert Kocharian, et al., you are treading on very thin ice and don’t say in the future that you were not warned (though you will not say this I'm sure as you really have no future). Sooner rather than later, the ice will break, you all will fall and there will be no one to save you.
Posted by Ara at 7/21/2006 10:21:00 AM